Call of Duty (COD) Vanguard Slow Download Speed on Battle.net – How to fix

Another year, another COD title. Call of Duty Vanguard has finally available across all major gaming platforms. As expected from an COD game, it has already managed to garner close to a million players, coming from all the platforms combines. Just like Modern Warfare 2019 and Black Ops Cold War, COD Vanguard is an extremely engaging title, and every player can pick up the pace irrespective of their play style. While most of COD fans play Warzone nowadays. There is still a decent percentage of player base that enjoys the Multiplayer modes more than the BR.

But unfortunately, just like every COD game ever, Vanguard has its fair share of issues. Players have been experiencing innumerable amount of bugs, glitches, errors and performance issues since the launch. With more popping every minute.

The issue we are talking about here is the extremely slow download speeds while downloading or updating COD Vanguard on PC. Now, COD games are known for their huge sizes and updates. Imagine downloading a 30 GB patch with your download speed stuck at 2 MB/s.

Unfortunately, there is no “free fix” for this issue. And I am telling this because I was struggling from the exact same issue. I have a 300 Mbps Fiber connection where I get a download speed of 35-40 Mbps almost everywhere. But on the Battle.net launcher, I was getting a download speed around 2 MB/s while downloading Call of Duty Vanguard. And it is very frustrating as you have to sit for hours before you can even launch the game. So, this is what I did to fix the issue.

I had a year-long subscription to a VPN called Private Internet Access, and I decided to give it a try. So all I did was: 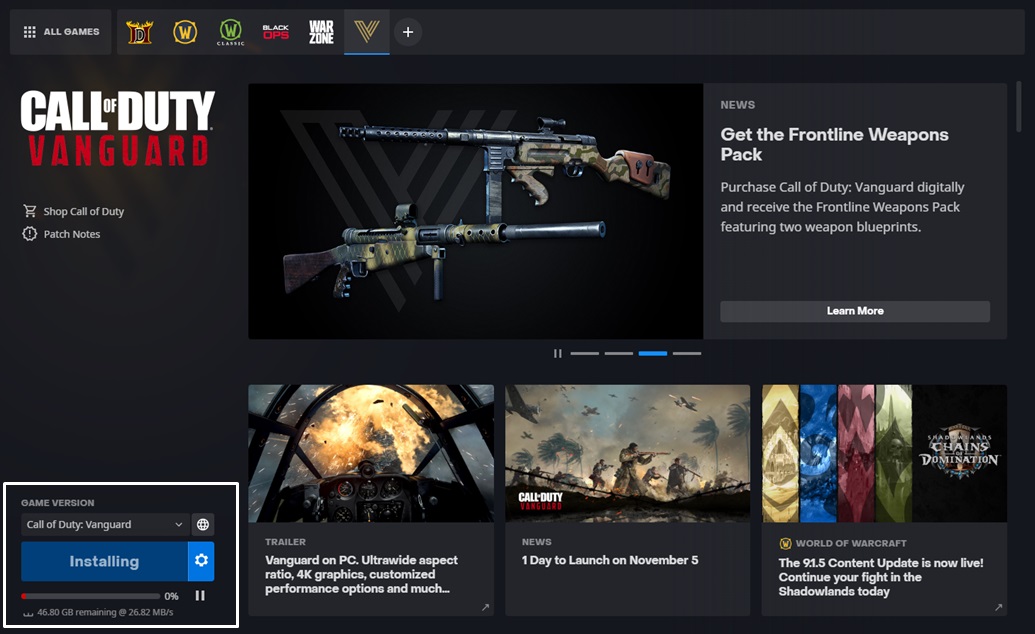 My download speed shot up from 2-3 MB/s, all the way to 31-32 MB/s. Yes I know that it is not my full download speed. But, it is way better than waiting countless hours for downloading a single patch. Knowing that, Sledgehammer Games would probably release 9000 more patches to fix the issues surrounding the game.

This issue is not only exclusive to the Battle.net app, but it is a problem on Origin and EA Play as well. Without turning on VPN, I get horrible download speeds while updating or downloading Apex Legends.

The slow download speed is not an issue from the side of your connection. It is a server related issue which can only be fixed by Sledgehammer Games. I have tried downloading other games from Battle.net as well, and every time I got my full download speed.

You can use any good VPN for this, actually. You have to just make sure that the VPN you are choosing doesn’t have data limits.

If you have a fix that doesn’t require you to use any VPN or any third-party application, then do let me know in the comment section below. Also, you can check out the other Call of Duty Vanguard guides on Frondtech. Good luck!