The Season of the Haunted, which is also the Seventeenth season of Destiny 2, has brought a handful of content into the game. The update might not be as big as Witch Queen. But I am pretty sure we all knew that it wasn’t going to be, anyway. The Witch Queen update was like 22 GB. Whereas, Season 17 update is just around 6 GB on PC.

This Season has also brought some fan-favorite weapons, like the Austringer Hand Cannon, Beloved Sniper Rifle, Calus Mini Tool, and the Drang Mini tool. Now, I am not sure if they are as good as how they used to be in Season of the Opulence. But, I am pretty sure that with the right rolls, they are all good.

Anyway, there are plenty of ways to get these weapons. But for now, the most convenient way to farm these weapons is by opening Opulent Chests, which are spread out all over the Derelict Leviathan.

Now the question is how to get Opulent Keys in Destiny 2. Here is how.

In my opinion, the best way to get Opulent Keys is by doing Nightmare Containment on Derelict Leviathan. You just have to make sure that you reach the final encounter of the activity, where you fight the boss. So that you can make the chest spawn. You don’t even have to beat the boss. Just make him spawn. I am hearing a lot of people say that you don’t get Opulent Keys from the Nightmare Containment chest, if you don’t manage to beat the boss. That is completely false.

I was doing Nightmare Containment solo, and I didn’t manage to beat Nightmare of Eliykris, The Machinist. After the timer ended, the boss left, and the chest spawned. After I opened the chest, I got my first Opulent Key. 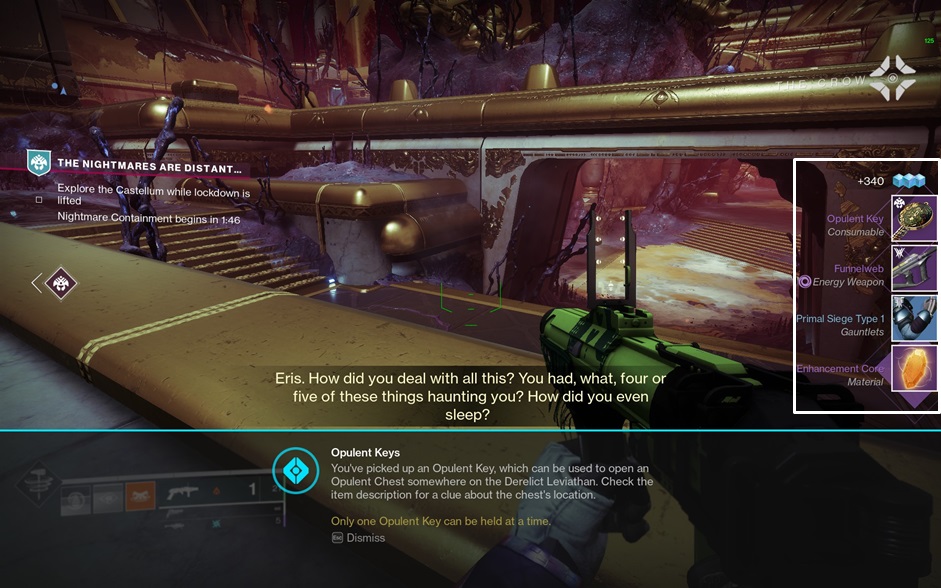 Of course, there are other ways to get Opulent Keys, as well. You can get one after completing the “Leviathan Returns” quest. But that is the thing. You get only “one”.

Apart from that, you can also get Opulent Keys by eliminating high-level enemies in Derelict Leviathan like the Orange-bar Nightmares and the Alcove Treasurers. But the problem is, they don’t spawn that often. So that is something which is not under your control.

I would say if you are not willing to do Nightmare Containment. Then the second-best way to get Opulent Keys is by opening Haunted Alcove Chests. Just remember to put a cache detector mod on your Ghost.