Titan void 3.0 build – It has been quite a while since I have written any cornerstone Destiny 2 article on Frondtech. And what could be better than a nice guide on how to solo The Witch Queen herself, on Legendary Difficulty.

Destiny 2 has always been one of my favorite games of all time. Bungie does hit the game with a lot of updates. So hit, while some miss. But, I don’t think anyone would deny, that Destiny 2 is one of the most “Complete” PvE titles out there. The game has something for every kind of player.

To date, I have bounced in and out of Destiny 2, quite a few times. It is true, some updates manage to completely ruin my experience, and leave a terrible taste in my mouth. But I often find myself coming back to the game. No matter how many times I promise that I won’t make a return, ever. And the 713 hours spent in the game, makes it obvious.

I won’t lie, before The Witch Queen update hit, I hadn’t touched Destiny 2 in over 8 months. I was just tired of doing the same activities, that just offer some reskinned weapons, over and over again. In fact, I wasn’t the only one. My friends, who I have been playing this game with, for the last 3 years, had also given up.

It was after seeing The Witch Queen trailer, we decided to give Destiny 2 another shot. And boy, were we impressed! I don’t think I am overexaggerating when I say that The Witch Queen is the best update, after Forsaken, to ever hit Destiny 2.

“The Witch Queen update is a breath of fresh air”

The Season of the Risen, or the Season 16 update, kicked off with The Witch Queen holding the Baton, in Destiny 2. Everything about the DLC has been awesome so far. The Campaign is great, the new Savathun’s Throne World destination looks fresh, and not like a reskinned planet, the new Lightbearer Hive enemies, top-class Legendaries, like the Funnelweb and the Ragnhild-D, followed by unique Exotics, like the Parasite and the Osteo Striga, which I also like to call “my favorite weapon”. I am loving every bit of it.

There hasn’t been a single moment until now, where I and my friends have felt boredom or felt that the game is heading towards the same old format. We were always on our toes during the missions.

“Be Brave” or “Become Legend”

Now, when you first launch Destiny 2, after downloading the update. You are greeted with two options. “Be Brave” and “Become Legend”. The “Brave” difficulty offers a more “Classic” approach. You can just sit back, relax, and play the game, in whatever way you want. The enemies, the bosses, the world, they all are extremely forgiving. On the other hand, the Legendary difficulty is a completely different story:

With that being said, it is definitely worth it, because you get Power Level 1520 Weapons and Armor, at the end of the Campaign. And you also get to choose between two of the new Exotics for the different classes.

Also, I am pretty sure, that most of you, who are reading this article, at the moment, are playing the game on Legendary difficulty. This brings me to the main topic. What I used and did to solo The Witch Queen Campaign and beat Savathûn, on Legendary Difficulty?

To be honest, after the long break, my time in Destiny 2 was not easy initially. On top of that, The Witch Queen campaign does not go easy on players, who are lacking decent gear, weapons, and of course, the Power Level. I was having a really hard time, even on the Classic difficulty.

But, slowly and steadily, I started getting my groove back. And, I finally managed to beat the campaign on Classic Difficulty. With that being said, here is my first recommendation to players who are new, or are coming back to Destiny 2 after a long time.

Please go with Classic difficulty first. Take the time to enjoy the campaign and the Lore. Once you are done completing the campaign, come back and start again, on Legendary, to get your hands on the 1520 Level Armor Pieces/Weapons, and the Exotic. I am saying this, only because I am seeing a lot of people go for the Legendary difficulty, because they think that they won’t be able to replay the campaign, if they complete it once, and will lose the sweet high-tier rewards.

Coming back to the main point, I am a Titan main, and it took me several hours, and several solo unsuccessful runs of Savathun, to come up with this build. Here is it:

If you just came here for the build, and don’t care about understanding it, then you can feel free to leave. The table, above, is all that there is to it.

Now, let me explain how does the build work. This whole build revolves around working with your Void Grenades. After the Void 3.0 rework, the Void Grenades have becomes really OP, and I don’t see a reason to not use them.

Let’s start with the MVP of this Void 3.0 Build, the Heart Of Inmost Light Exotic. If you do not have this exotic, this build won’t work for you, unfortunately. The Intrinsic Perk of this Exotic, Overflowing Light, states:

This perk will allow you to spam your abilities constantly. Everything else is just there to make things better. As soon as you use an ability, you will get “Empowering” buffs, and the other two will start refilling.

Start by throwing your Scatter Grenade(has the highest damage output among all other grenades) at the enemy, and do your damage first. Then throw your Shield at the Enemy, and get the Overshield buff(hitting an enemy with the Shield grants Overshield). And because of the aspect, Offensive Bulwark, your Grenade will start filling up faster than it already was, due to the Empowering buff from the Heart Of Inmost Light. In case, you don’t manage to get back your grenade fast enough, use your Barricade.

On top of that, you have the Echo of the Exchange fragment, that will allow you to get Grenade Energy on Melee final blows. And you also have 5 Discipline Mods, Grenade Kickstart, Absolution, and the Bomber, to make things even better. You will be getting your Grenades back, in a blink of an eye.

For damage and survivability, you have the Controlled Demolition aspect, which allows you to make targets Volatile, by hitting them with your Grenade or Melee. Damage to Volatile targets causes them to explode, and you get health regeneration. Pair that with Echo of Expulsion, and you will be causing chain explosions.

The Echo of Instability will allow your Funnelweb to get Volatile Rounds when you eliminate one or more enemies with your Grenade. And, I have already told you the use of Volatile Rounds. Also, since Funnelweb has an extremely fast fire rate, get ready to wreak havoc. The Font of Might mod will increase the damage output of your Funnelweb, even further. Just throw your shield at your enemy, due to the Melee Wellmaker mod, the enemies will drop Void Wells. Pick them up.

Ward of Dawn is for Boss damage phases only, and because of Ashes to Assets, you will be having your Super bar full, quite often.

For beating normal enemies and Majors, you can just use the Funnelweb, and pair that with Witherhoard or any Kinetic Grenade Launcher with Major Spec. The Red Herring is for the Yellow Bar enemies and Bosses. Don’t forget to use Boss Spec on it. You can use the Sleeper Simulant, as well.

Before we start, why don’t I just show you, how this Void Build works against Savathun:

I won’t lie, Savathun gave me a really tough time initially. But I also have to thank her, because without her, beating me again and again, I wouldn’t have gone out of my way to come up with this build.

Anyway, to beat Savathun, you have to learn to act fast and have a good idea about what you are doing. If you get confused and make any wrong move, she will “Super Spam” you to another dimension.

Start by getting Honed Edge x4 on your Izanagi, lay down your Ward of Dawn, and get your Weapons of Light buff, wait for Savathun to show up, and throw your Scatter Grenade at her. As soon as the first fragment of the Scatter Grenade hits her, you will proc Echo of Undermining(void grenades weaken targets), and the other fragments will deal increased damage. Shoot her with Izanagi, go back to your bubble to avoid her supers, reload your Izanagi and get Honed Edge x4 again on the way, and shoot her again. Every action of yours, combined with Thread Cutter x3, will take away a good chunk of her health.

Now, just go and eliminate the 3 Witches on the sides, get Thread Cutter x3, and do the same thing that you did before, with or without Ward of Dawn. Use your Rocket Launcher to increase the total damage output in every Phase, if you have to.

Before I conclude this guide, I just want to say that I am currently using this build personally, and I have done plenty of Master Nightfalls with this. I am planning to use this for Grandmaster Nightfall, as well. There is a 100% chance, that you already know about a Void 3.0 build, that is probably better than mine in every way. And that is fine. I am just doing my part for the Destiny 2 community. 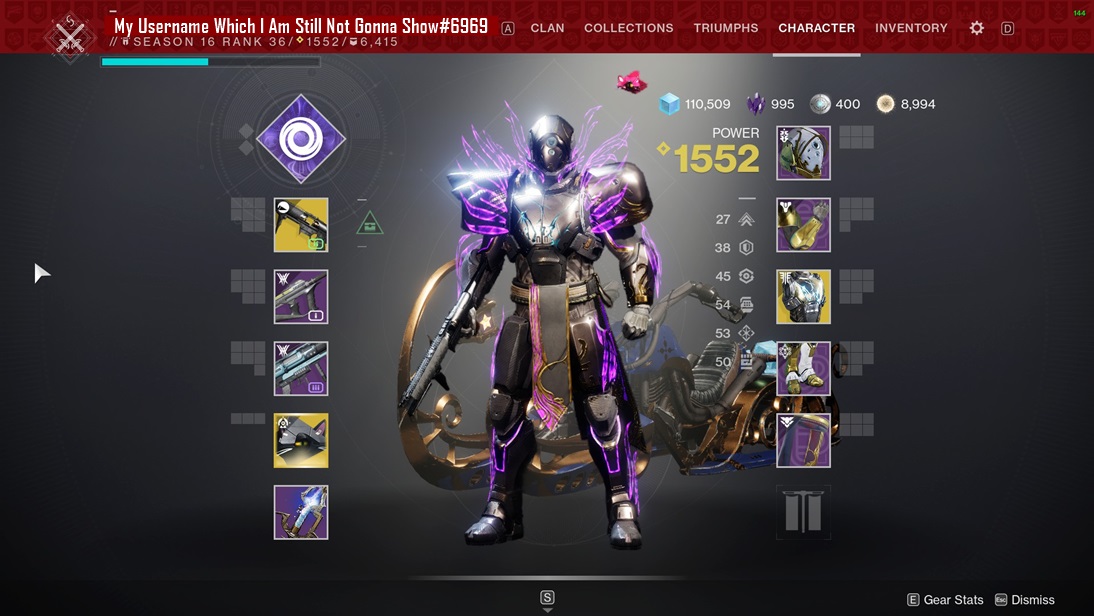 If you think this guide has helped you, then let us know in the comment section below. Also, for more guides on Destiny 2, keep an eye on Frondtech! Happy Gaming Guardians!