AC Valhalla No Sound or Audio Bug – It looks like some people are experiencing an audio bug in AC Valhalla that break the in-game sound of the game. Is there a fix? Let’s find out.

What is the no sound/audio bug in AC Valhalla

It is a bug that a lot of players are currently experiencing. The bug is causing the game to go completely mute. Sound is available only during intro videos and animated cutscenes.

This seems to be common bug that a lot of players are experiencing at the moment as there are a lot of posts regarding this on Ubisoft forum for Assassin’s Creed Valhalla. Here is what an user who posted about this bug on the forum has to say:

I just started the game and i found that there is a terrible sound bug. Can’t hear every dialogs of characters while I can hear background sounds, there is even no subtitles too.
I already installed day-one patch. I have no idea what is wrong. Should I re-installing a game?

And a lot of others users commented on this posting, claiming that they are experiencing exactly the same issue. Now the question is, is there a way to fix this sound bug?

Fortunately, there is a way to fix this bug and it has been confirmed to work by many users on the forums. Actually the user who posted about this bug in the first place, came out with a fix all by himself. Here is what user SeeRuh_KR has to say:

I guess I found the solution.
Go to ubi launcher, then set language as English.
After starting game, you can choose your own language in in-game option 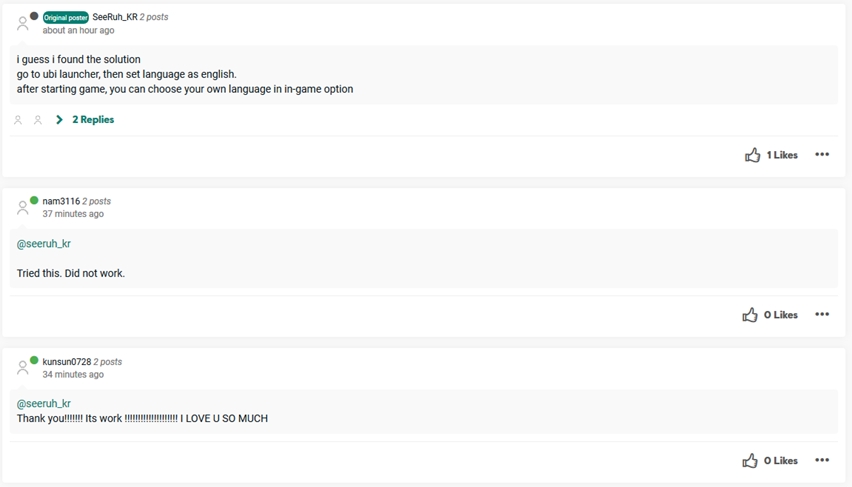 So what he is saying is, you need to start Ubisoft Connect first. Go to Settings and set the Language to English. Then after launching AC Valhalla you can choose the language of your choice from the in-game settings menu. And this should fix the audio bug.

I personally haven’t tried this fix because I never encountered the bug in the first place. Here is the link to the original post.

If the fix mentioned above ends up working for you then let us know in the comment section below. Also, if you are facing other problems with the game then try checking out our other guides on Assassin’s Creed Valhalla. Who knows, you might end up finding a fix.