Abandon a bounty in Diablo Immortal – Diablo Immortal is a recent action F2P game from Blizzard Entertainment. In this role-playing game, you have to defeat monsters and go forward by finishing your daily quests.

Have you wondered about bounties, which are known as mini-quests? Well, various bounties have their bonuses and complication level. So you can earn more knowledge while solving them. But some bounties are somewhat difficult to complete. So here, I would like to share How to abandon a bounty in Diablo Immortal.

In Diablo Immortal, Bounties act as mini-quests. If you want to try some Bounty quests, all you need to do is finish the tutorial of Charsi in the Palace Courtyard, Westmarch. Once you’re completed, head to the Bounty Board and begin the conversation with Derek, the Bounty Quartermaster. He’s the one who will assign the bounties to you. 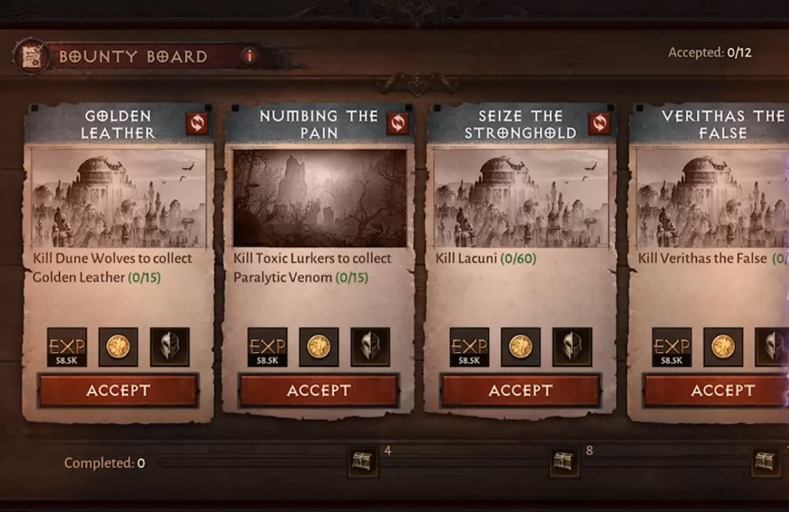 If you complete four bounties in a day, you get the reward of a chest of gold. But every day, you have to finish eight bounties, and it will take a considerable time to solve each bounty. Due to this, you might find some bounties hard to complete.

How to abandon a bounty in Diablo Immortal

Some bounties are easy to solve, like, Bird of Prey. While Clearing the Cobwebs bounty will be like a nightmare because it takes more time to complete. You may feel the struggle of defeating 50 spiders in a short period.

While defeating those spiders, they’ll generate as groups of 5; it takes around 10 minutes to attack the following groups. So absolutely, it will waste your time. If you want to be productive in gameplay. Don’t worry; you can abandon the Bounty.

To abandon a bounty, all you need to do is head over to the Menu and select the quest option; it will lead the way to open the quest menu. Now, choose the Abandon Bounty option; it will help you cancel your bounty.

The good news is that you don’t have any penalty for abandoning a bounty in Diablo Immortal. But keep in mind that bounties are restored each Monday.